The beginning of the church in Hartford must be 20th December 1821 when a meeting of the inhabitants of The Township of Hartford in the Parish of Great Budworth resolved to raise by private subscription, sufficient funds for the building of a church. The nearest church at that time was Witton some 2 miles away.

There is no record of the numbers at that meeting (the population of Hartford was about 800 people), but £950 was raised and Mr John Wrench offered part of one of his fields for the church and churchyard. It is interesting to note that every contributor of £50 was entitled to a pew. Building started on 29th March 1822 and the church and churchyard were consecrated by the Bishop of Chester on 8th December 1824 following completion at a cost of about £1450.

The Township of Hartford expanded over the next 40 years and the New Parish of St John Hartford was constituted by an order in Council on 12th September 1863. The church was proving too small for the expanding population, and was falling into disrepair. On 14th April 1873 a vestry meeting approved plans for a new church. The Vicar and Parishioners had to find another building would have to use for Divine Service until completion of the new church.

A faculty dated 8 May 1873 allowed for the demolition of the existing church, and the Bishop gave permission (on 16th June) for the temporary use of the National School for Divine Service.

The new church was designed by John Douglas, a leading provincial architect of his day, who was born in Sandiway, and practiced in Chester. He designed in excess of 500 buildings from Surrey to Scotland, but most are in Cheshire and North Wales. The foundation stone was laid on October 29th 1873 by Lt Col. Marshall.

On 18th June 1874, a fete was held on a field in front of the Manor House (now occupied by Eurocamp). Arrangements were made with the railway companies to offer special facilities for visitors from Liverpool, Warrington, Crewe, Sandbach and Manchester, and with the steamer owners on the River Weaver for vistors from Acton Bridge, Weaverham and Winsford. The gross takings amounted to £800, expenses were £520, leaving £280 towards the building fund. 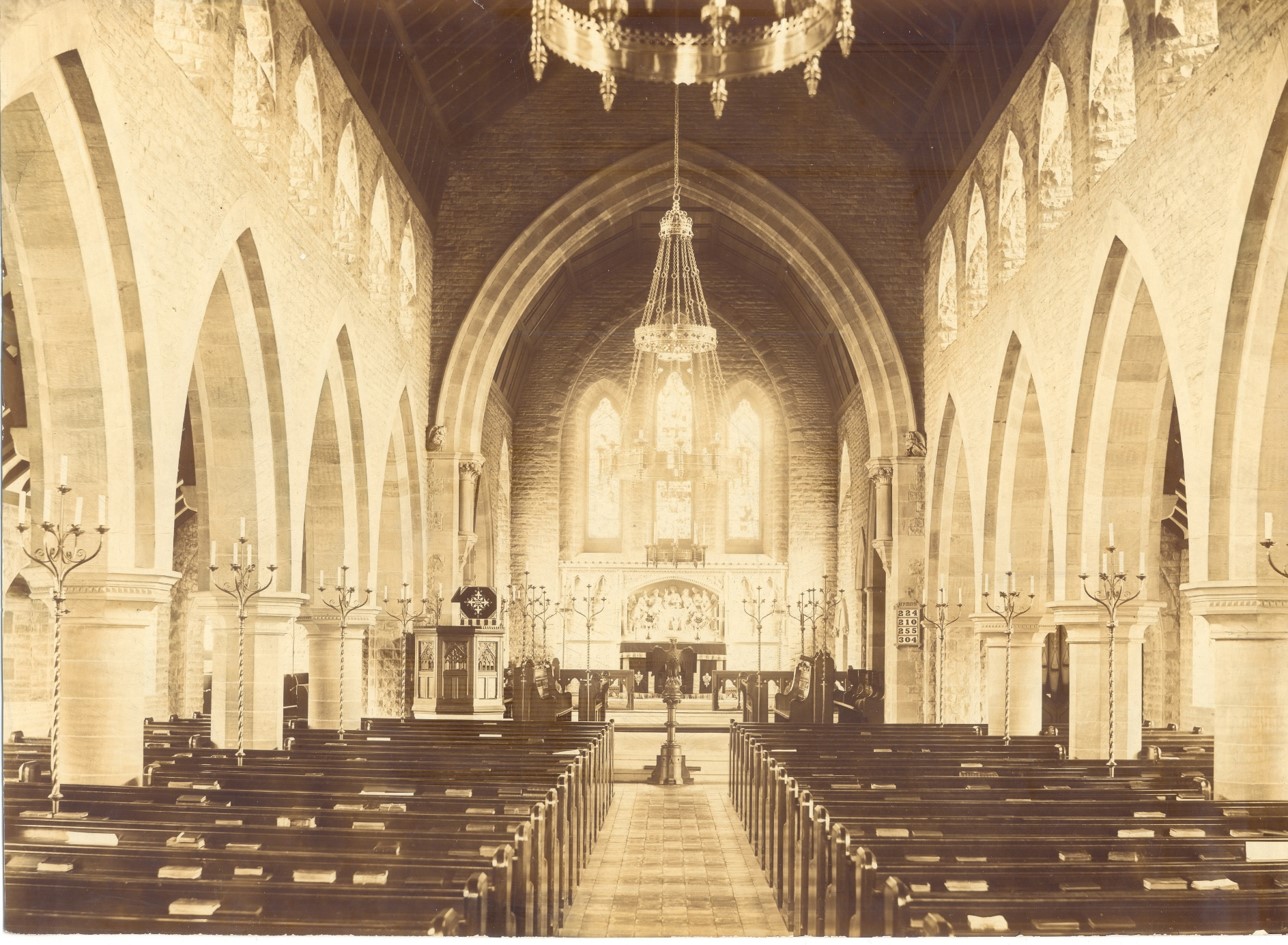 The Church was completed in time for the consecration by the Bishop of Chester on 24th June 1875. At this time, the Church comprised the chancel and nave with its porches on the north and south entrances together with the foundations of the tower. On March 12th 1883, the vicar invited the parishoners to complete the church by raising the money to build the tower.

In August that year, an “Olde Englyshe Fayre” was held in Grange Park from which receipts were £799 of which £550 went to the building fund. The tower was built and dedicated by the Bishop of Chester on 14th April 1887 to commemorate the golden jubilee of Queen Victoria; and on June 20th 1897, a newly installed ring of 6 bells was dedicated to commemorate her diamond jubilee. The total cost of the new church, including the organ and pulpit, tower, bells and enlargement of the churchyard had been £12,508.

A vestry meeting held on the 14 October 1920 agreed to erect a war memorial which was placed near the main entrance, and was dedicated by the Bishop of Chester on 27 November 1920. In 1954 a tablet was added with the names of the fallen in the Second World War.

On 11th February 1925 a vestry meeting decided to mark the 50th anniversary of the church by building a choir vestry on the East wall. The faculty was issued on 14th December 1925.

In 1929 the church hall was constructed on a site across the graveyard.  It was enlarged by the addition of the stage area in 1966, and the newer extension to the hall was added in 1984.

A Centenary fete was held on the land adjacent to the Church Hall on 21 June 1975.  The proceeds were used to build a platform to extend the chancel into the nave, and to carpet the church with carpet tiles.

For some years, the PCC had been concerned with the state of the wooden floor which was suspended over the earth below, and which received inadequate ventilation. On 20th May 1990 the PCC resolved to apply for a faculty to replace the wooden floor with a solid one in the north and south transepts and the chancel. Since the organ had to be removed for this to be done, the opportunity was taken to replace the pipe organ with an electronic one at a cost of about £17,000.

The second part of this work was carried out in the first 3 months of 1994. The wooden floor in the nave was removed and replaced with a solid one, which was covered with carpet.

The pews were replaced with comfortable chairs which had the seats upholstered in a matching red material. The total cost was £56,000.

In the intervening year of 1993, the church roof was refurbished at a cost of about £60,000. The tiles were removed, any suspect timber replaced, and polystyrene insulation put into place. The roof was re-felted, and the tiles replaced, with new tiles being provided to replace any broken ones.