Who's who
Register Church Member Login 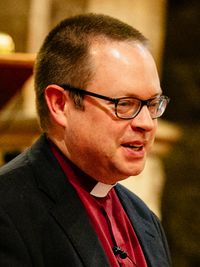 Mike is married to Sarah and they have four children, Mary, Anna, Leah and Noah. Mike joined the parish ministry team in 2001 as Associate Vicar. After leading the team that planted Christ Church, Greenbank, he became vicar in March 2004.

Having grown up in Australia, Mike trained at Oak Hill Theological College and was ordained in 1995. He served previously as layworker at St Oswald's, Bidston and curate of St Mary's, Cheadle, both in this diocese, and as minister in charge of St Anne's, Hollington, near Hastings in Sussex. Interests include walking and the gym.